Rheumatoid arthritis is a very common cause of joint pain. It is a progressive and often disabling chronic inflammatory disorder. Everybody knows about Rheumatoid arthritis affecting the joints in the hand and wrist, but it also affects the ankles, knees, elbow, shoulders, neck, hips, jaw and virtually any joint. The inflammation of Rheumatoid disease also affects other parts of the body including the heart, blood vessels, lungs, skin and body tissues, eyes and salivary glands. However, inflammation of the joints, especially in the hand, is generally the first and most dominating and disabling feature, which is why I have included it in this chapter.

To be able to understand the spiritual and physical dynamics behind Rheumatoid Arthritis, you need to read through the following two chapters which have essential background knowledge:

Behind Rheumatoid arthritis, as with all autoimmune diseases, is a low self-esteem, self-hatred, self bitterness, self-rejection, self-condemnation and/or guilt upstream in a person’s thought life. Sometimes there is a feeling of being unloved and unwanted where self-hatred comes in because of failure of a father or husband to nurture you if you are a female or if you are a male, because your father did not nurture you. Occasionally some men are victims of their wives. Whatever the case, it involves varying degrees of
self-hatred.

You learnt in the chapter on autoimmune diseases that when you attack yourself spiritually, your body eventually conforms to your thought life and it begins to take on a mission of self destruction physically. The biogenetic character of the immune system is changed and it begins to attack and destroy its own body tissue, which in this case was the bone and cartilage in your joints.

However the main cause of Rheumatoid arthritis is the type IV hypersensitivity reaction where the cells of the immune system directly attack and destroy the joints. The T cells, eating cells (macrophages) and other inflammatory cells produce chemicals called TNFa (Tumor Necrosis Factor Alpha) and interleukin 1. These two chemicals stimulate the cells in the joint (called synoviocytes) to produce toxic chemicals (enzymes) that destroy the tissue and bone in the joint. The TNFa and interleukin 1 also stimulate the cells in the joint to multiply. This leads to the formation of a thick layer of inflammatory tissue called pannus that spreads over the joint and cartilage which is progressively eroded and destroyed. As the cartilage is destroyed, the joints become stiff as the bones in the joint are not able to slide over each other very well. Muscles and tendons make the joints move and they also stabilize the joints. As the inflammation in the joint continues, the muscles around the joint are also damaged and they start to shrink (atrophy) and weaken. The tendons which attach the muscles to the joints break (rupture). This causes the joint to become unstable and the damaged bones slide out of place. Thus the joints become deformed.52 This is summarized in the following diagrams:

Summary of the Progression of Rheumatoid Arthritis 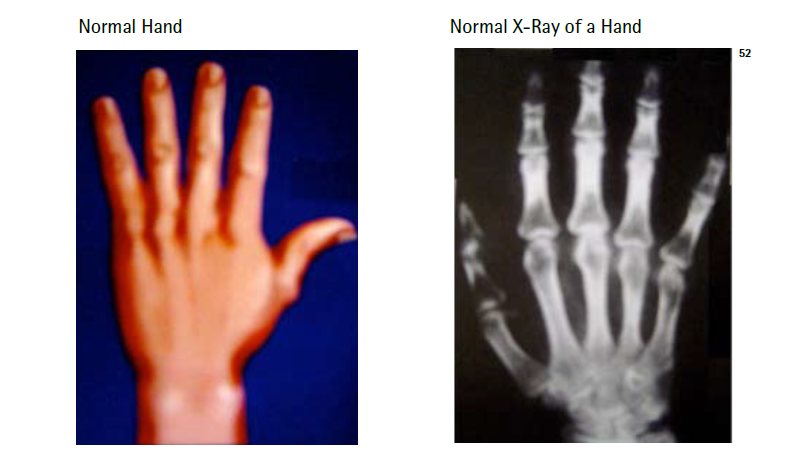 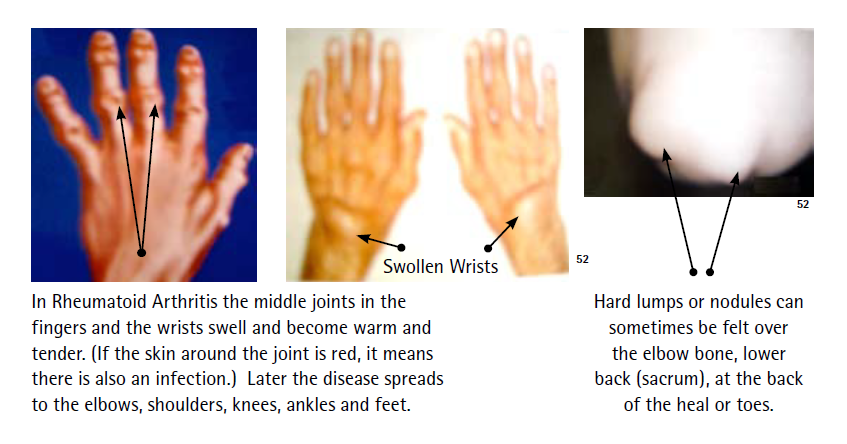 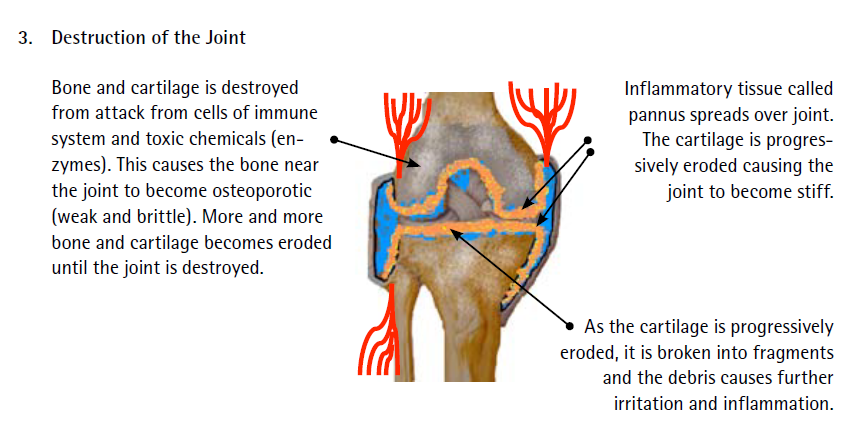 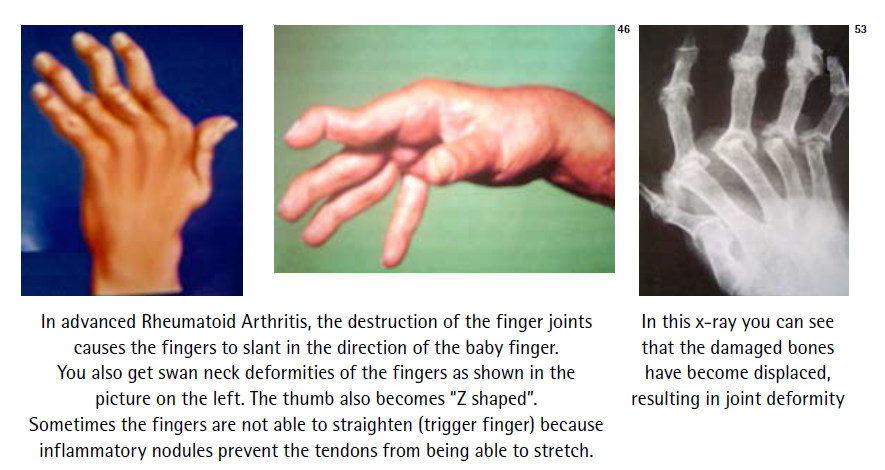 How Rheumatoid Disease is Diagnosed

If a person has at least 4 of the following criteria46, the person is diagnosed with Rheumatoid Arthritis: 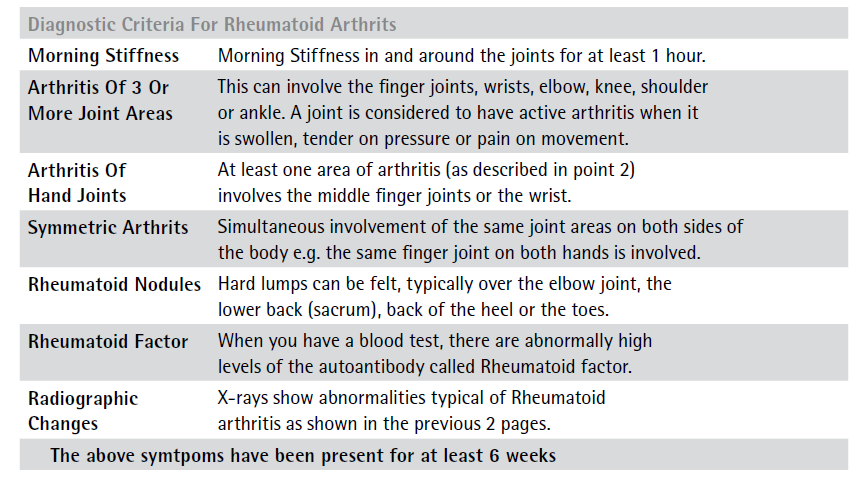 Other Areas Affected by Rheumatoid Arthritis

• Feet: the toes become clawed, which is painful when standing up or walking because weight is exerted on areas of bone that were not designed as pressure points. This leads to the development of calluses. The heal turns outward due to damage in the ankle joint and there is the loss of the long arch of the foot (flat foot) due to rupture of the tendons at the back of the ankle (Tibialis posterior tendon).

• Eyes and Salviary Glands: The inflammation and damage caused by the immune system can also impair the function of the salivary and tear glands. This results in dryness, irritation and redness of the eyes and dryness of the mouth which is called Sjogren’s Syndrome. The eyes feel gritty, sensitive to light (photophobia) and vision can be impaired.

• Nerves: The thickening of the inflamed tissue and the displacement of the bones in the joints can sometimes squash a nerve causing pain or pins and needles. This most commonly involves the median nerve as it passes through the wrist. As a result the person feels pain and pins and needles in the hand (carpel tunnel syndrome). The ulnar nerve that passes by the elbow joint is also commonly affected. The spinal cord in the neck can be compressed by the vertebra in the spine sliding out of place. This causes a headache at the back of the head with pins and needles or an electric shock in the arms.

• General: Anorexia or loss of appetite, weight loss and fatigue. Generalized osteoporosis (where the bones become brittle and weak) and muscle wasting occur due to inflammation throughout the body. Sometimes people with Rheumatoid arthritis also get amyloidosis. This is where defective pieces of antibodies from the immune system are deposited in various tissues and organs all over the body. This causes irritation and inflammation. This is not an autoimmune disease but it is another form of the body destroying the body and is also a result of the person attacking themselves spiritually with thoughts of a low self-esteem, self-hatred, self-rejection, self-condemnation and/or guilt. Rheumatoid arthritis and the spiritual dynamics behind it can also increase the risk of the development of lymphoma which is cancer of the lymph.

Rheumatoid arthritis is a life long disease that will progressively get worse with intermittent periods of exacerbations and periods of improvement. It is a disease that is considered incurable in the medical field and the best that doctors have to offer is to put you on drugs such as methotrexate, sulphasalazine, steroids (prednisone) and anti-inflammatories. These drugs do not cure Rheumatoid arthritis, they just slow down the progression of the disease. And they come with their own Pandora’s box of side effects. For
example methotrexate causes liver damage and the long term use of anti-inflammatories causes stomach ulcers. These drugs cannot cure Rheumatoid arthritis because they don’t deal with the underlying issue.

Permanent eradication of Rheumatoid arthritis requires the removal of the toxic mindset causing it. You have got to change your thinking concerning how you think about yourself. Building a healthy selfesteem starts with knowing who you are in Christ and establishing your identity and sense of self worth in Him. You need to learn to see yourself as God sees you. The chapter of page 498 will help you with this.

Finally, after you have worked through that chapter, pray this out loud with me: “In Jesus’ Name I command the cells of the immune system to stop attacking and eating the connective tissue and cartilage of my joints. Calling those things that are not as if they were (Romans 4 v 17), I now speak a creative miracle into my joints, I speak the cartilage back into place now …be formed! By the stripes of Jesus I am healed and made whole! (Isaiah 53 v 5)”

Download thees E books for Free to assist in your Healing!

Dirk Flemix – Living with Eternity on my mind book final

Prayers for the end times

What Do We Do When We Are Not Healed?

Summary of Common Diseases of the Eye

The Spiritual Reason Behind Ankylosing Spondylitis

The Spiritual Reason Behind Multiple Sclerosis

The Spiritual Reason Behind Colic

The Spiritual Reason Behind Hodgkin’s Disease and Leukaemia

The Spiritual Reason Behind Rheumatoid Arthritis

The Spiritual Reason Behind Arthritis

The spiritual Reason Behind Sinusitis

The Spiritual Reason Behind Epilepsy

The spiritual reason behind High Cholesterol

The Spiritual Reasons Behind Headaches

Conviction from the Holy Spirit vs Condemnation from satan

The spiritual Reasons behind Stomach Cancer

I Cannot Loose Weight! Diets does not work!

The spiritual Reasons behind Uterine or Cervix Cancer

Skin Disorders due to social anxiety!

The spiritual reason behind Stomach Ulcers

Healing Article ~ I have Cancer!

The spiritual Reasons behind Prostrate and Testicular Cancer

The spiritual Reasons behind Depression!

Healing and Dealing with Sexual Problems in Marriage