Multiple Sclerosis is one of the most common neurological causes of long term disability. It is an autoimmune disease which means the body’s own immune system attacks and destroys the nerves. Therefore to understand the physical and spiritual dynamics behind multiple sclerosis, you need to first read through the chapter on autoimmune diseases on page 200.

Once you have read through the chapter on autoimmune diseases, please read through the section on page 46 under the heading “Separation from God’s Love” which also has essential background information relevant to multiple sclerosis.

There can also be a genetic defect that contributes to the development of multiple sclerosis. Therefore I also recommend that you read through the chapter on genetically inherited diseases on page 153, especially if other family members also had multiple sclerosis.

To help you understand what multiple sclerosis is, I need to first explain to you how a nerve normally works: Muscles cause different parts of your body to move. For example your arm moves when the muscles in your arm contract and relax. Your legs move when the different muscles in your leg contract and relax. Your muscles are instructed when to make a part of your body move by the brain. Your brain sends instructions to the muscles in the form of electrical current that travels along nerves to the muscles. The “electric shock” from the nerves attached to that muscle make it contract and move. When the electric shock is over, the muscle relaxes. 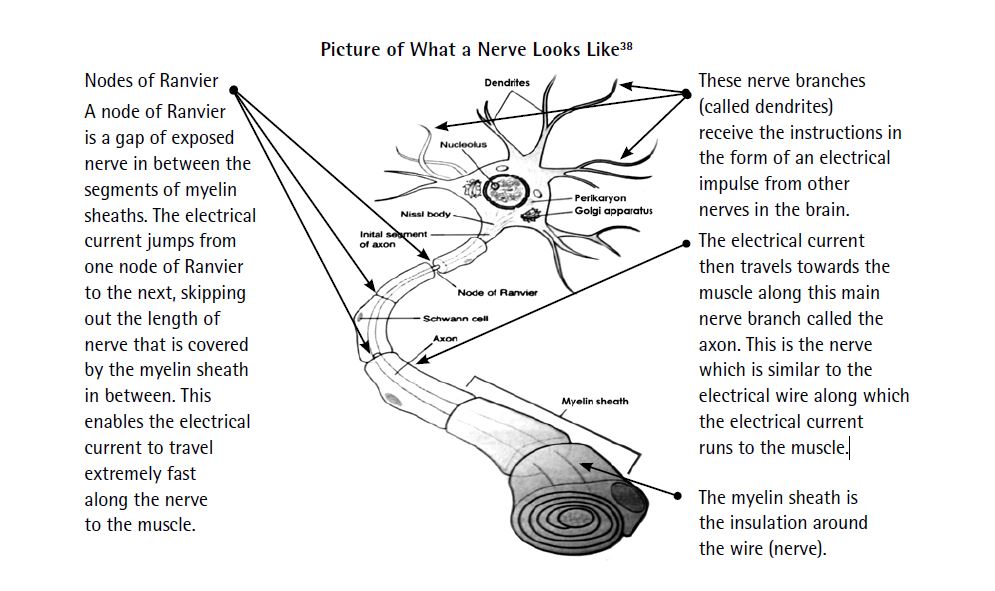 In multiple sclerosis, there is deep, deep self-hatred and guilt that often comes out of a father’s rejection.

The physical symptoms experienced in multiple sclerosis depend on which part of the body the nerves are damaged:

The disease typically follows a pattern where the person has a relapse and then a period of improvement. During the period of improvement, the immune system has temporarily stopped attacking the nerves and they are given a chance to recover a little. However the recovery from the damage is usually incomplete and therefore the person’s overall condition progressively deteriorates. The progress of the disease is variable. The disease is rapidly progressive in some people, especially children, while others may survive for over 20 years with only minor disability. Common complications of the disease include urinary tract infections, chest infections and pressure sores. Most people die as a result of these problems rather than from multiple sclerosis itself. Sometimes a person dies because the multiple sclerosis gets so severe
that even the muscles needed for breathing do not work or there is severe damage to the nerves in the brain and spinal cord. However, it doesn’t have to go that way. There is no disease that is incurable with God when His conditions for healing are met.

As you read in the chapter on autoimmune diseases, when you are attacking yourself spiritually with thoughts of self-hatred, self-rejection, self-condemnation, self disapproval, guilt and condemnation, your brain will eventually convert that into a physical reaction and your body begins to attack and destroy itself physically. In multiple sclerosis, there is deep, deep self-hatred and guilt that often comes out of a father’s rejection. You see, the father is responsible for the spiritual welfare of the family (see Ephesians 5 v 22 – 25). It is the father, not the mother, who reaffirms identity and destiny into a child. The father is responsible for his daughter and his son’s self-esteem and sense of self worth and value. It is the father’s job to reflect the Father heart of God to His family.

Your healing is going to begin with learning to receive God the Father’s love and you may need ministry in this area as I explained on page 51 in the section I initially referred you to. This also involves releasing bitterness and forgiving your father or the man who hurt you. The chapter on page 481 will help you in this area.

Secondly, it is vital that you develop a healthy self-esteem. This comes from knowing who you are in Christ and establishing your sense of self worth and identity in Him. You need to change your thinking concerning how you see yourself and learn to see yourself as God sees you. Who God the Father says you are is more important than what your earthly father said about you. The chapter on page 498 which will help you with this. When you learn to love yourself, your new thinking patterns will be converted into a physical reaction, which this time is healthy. Your immune system will recover and begin functioning as God originally designed it to, and will no longer attack and destroy its own body tissue.

Lastly, damage done to nerve tissue is often irreversible. A creative miracle by God and ministry is needed to restore this type of damage. In the Name of Jesus you need to command the immune system to stop attacking the nerves and operating in the gift of miracles you need to speak new nerves into being. I explain more about operating in the gift of miracles on page 123 under the heading “You Can’t Always Do It Alone”.

Download thees E books for Free to assist in your Healing!

Dirk Flemix – Living with Eternity on my mind book final

Prayers for the end times

What Do We Do When We Are Not Healed?

Summary of Common Diseases of the Eye

The Spiritual Reason Behind Ankylosing Spondylitis

The Spiritual Reason Behind Multiple Sclerosis

The Spiritual Reason Behind Colic

The Spiritual Reason Behind Hodgkin’s Disease and Leukaemia

The Spiritual Reason Behind Rheumatoid Arthritis

The Spiritual Reason Behind Arthritis

The spiritual Reason Behind Sinusitis

The Spiritual Reason Behind Epilepsy

The spiritual reason behind High Cholesterol

The Spiritual Reasons Behind Headaches

Conviction from the Holy Spirit vs Condemnation from satan

The spiritual Reasons behind Stomach Cancer

I Cannot Loose Weight! Diets does not work!

The spiritual Reasons behind Uterine or Cervix Cancer

Skin Disorders due to social anxiety!

The spiritual reason behind Stomach Ulcers

Healing Article ~ I have Cancer!

The spiritual Reasons behind Prostrate and Testicular Cancer

The spiritual Reasons behind Depression!

Healing and Dealing with Sexual Problems in Marriage